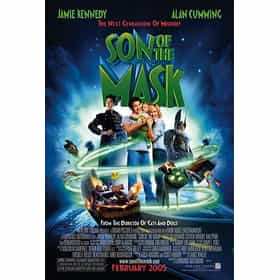 Son of the Mask

Son of the Mask is a 2005 American fantasy family-comedy film directed by Lawrence Guterman and starring Jamie Kennedy as Tim Avery, an aspiring cartoonist from Fringe City who has just had his first child born with the powers of the Mask. It is the stand-alone sequel to the successful 1994 film The Mask, an adaptation of Dark Horse Comics which starred Jim Carrey. It also stars Alan Cumming as the god of mischief, Loki, whom Odin has ordered to find the Mask. It co-stars Traylor Howard, Kal Penn, Steven Wright, and Bob Hoskins as Odin. Ben Stein makes a brief reappearance within the first few minutes of the film as Dr. Arthur Neuman from The Mask to reestablish the relationship with ... more on Wikipedia

Son of the Mask is ranked on...

Son of the Mask is also found on...