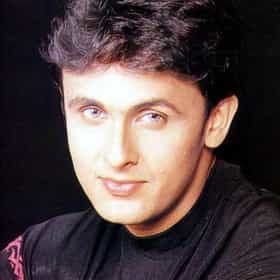 Sonu Nigam (born 30 July 1973) is an Indian playback singer, composer, live performer, host, and actor. He sings predominantly in Hindi and Kannada language films. He has also sung in English, Bengali, Manipuri, Gujarati, Tamil, Telugu, Marathi, Tulu, Assamese, Odia, Nepali, Maithili, Malayalam and various Indian languages. Nigam has also released Indian pop albums and acted in a number of films. He has been one of the highest paid Indian singers. He is often regarded as a "Modern Rafi" and is now considered as one of the most versatile singers of the Hindi film industry. He is also regarded as the "Lord of Chords". ... more on Wikipedia

Sonu Nigam is ranked on...

#301 of 455 The Greatest Singers of the Past 30 Years 201.1k VOTES One of the most debated topics in music is who are the greatest singers of the past 30 years. Whether you're a huge Whitney ...
#665 of 711 The Best Rock Vocalists 1.2M VOTES The best rock vocalists of all time are the frontmen of our favorite rock bands or those solo artists whose voices are some ...
#222 of 298 The (Male) Singer You Most Wish You Could Sound Like 129k VOTES What male singer's voice would you most like to have? This is a different question than "who are the best vocalists eve...
#8 of 135 People who voted for Sonu Nigam... also upvote Harry Potter Franchise on The Best Emma Watson Movies also upvote Hyder Ali on Freedom Fighters of India The Greatest Singers of Indian Cinema 104.4k VOTES Vote your favorite playback singers, pop singers, classical singers.
#3 of 60 The Greatest Indian Pop Bands & Artists, Ranked 4.7k VOTES This Indian pop bands list ranks the best Indian pop stars and singers by votes. This list of Indian pop artists let’s you...
#39 of 93 The Best Ghazal Bands/Artists 1.5k VOTES Ghazal artists list, with photos, ranked best to worst by votes. List of good ghazal bands includes a filter so you can sort...

Sonu Nigam is also found on...