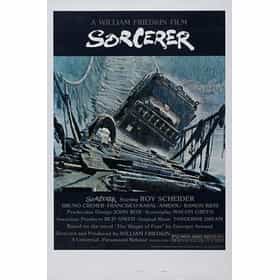 Sorcerer is a 1977 American existential thriller film directed and produced by William Friedkin and starring Roy Scheider, Bruno Cremer, Francisco Rabal, and Amidou. The second adaptation of Georges Arnaud's 1950 French novel Le Salaire de la peur, it has been widely considered a remake of the first adaptation; the 1953 film The Wages of Fear; however, Friedkin himself has disagreed with this notion. The plot has four outcasts of varied backgrounds meeting in a South American village, where they are assigned as truck drivers to transport cargos of nitroglycerin. Sorcerer was originally conceived as a side-project to Friedkin's next major film, The Devil's Triangle, with a modest US$2.5 ... more on Wikipedia

Sorcerer is ranked on...

Sorcerer is also found on...