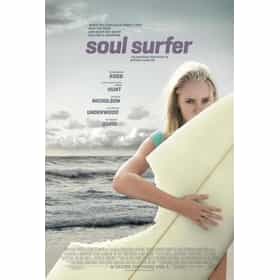 Soul Surfer is a 2011 American biopic drama film directed by Sean McNamara. It is a film adaptation of the 2004 autobiography Soul Surfer: A True Story of Faith, Family, and Fighting to Get Back on the Board by Bethany Hamilton about her life as a surfer and her recovery. The film stars AnnaSophia Robb, Helen Hunt, Dennis Quaid, and Lorraine Nicholson with Carrie Underwood, Kevin Sorbo, Sonya Balmores, Branscombe Richmond, and Craig T. Nelson. Filming took place in Hawaii in early 2010 with Robb wearing a green sleeve on her arm so visual effects could be added in post-production to create the appearance of a stump. ... more on Wikipedia

Soul Surfer is ranked on...

Soul Surfer is also found on...