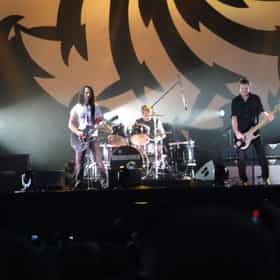 Soundgarden was an American rock band formed in Seattle, Washington, in 1984 by singer and rhythm guitarist Chris Cornell, lead guitarist Kim Thayil (both of whom are the only members to appear on every album), and bassist Hiro Yamamoto. Matt Cameron became the band's full-time drummer in 1986, while bassist Ben Shepherd became a permanent replacement for Yamamoto in 1990. The band dissolved in 1997 and re-formed in 2010. Following Cornell's suicide in 2017 and a year of uncertainty of the band's future, Thayil declared in an October 2018 interview with Seattle Times that they would not continue as Soundgarden; they did, however, reunite in January 2019 for a one-off concert in tribute ... more on Wikipedia

Soundgarden is ranked on...

#29 of 284 Musicians Who Belong in the Rock and Roll Hall of Fame 421.1k VOTES Update: the Rock and Roll Hall of Fame has listened to your feedback and inducted a number of artists on this list sinc...
#96 of 2,187 People who voted for Soundgarden... People under 30 are 2x more likely to vote for this The Greatest Musical Artists of All Time 13.4M VOTES When VH1 polled fellow artists to name the greatest artists of all time, it seemed like a good idea---but in reality, the li...
#319 of 358 The Worst Rock Bands of All Time 744.5k VOTES Here they are: the absolute worst rock bands in history, ranked from the most awful bands to the kind of okay but still pret...
#43 of 355 People who voted for Soundgarden... People on the West Coast are 2x more likely to vote for this The Greatest American Rock Bands 1.3M VOTES Some of the greatest bands in rock history are from the United States. While the merits of their musical prowess can be fair...
#6 of 411 People who voted for Soundgarden... also upvote Ten on The Best Albums of the 1990s also upvote In Utero on The Best Albums of the 1990s The Greatest Musical Artists of the '90s 1M VOTES   Take a big whiff- "mmmbop", it smells like the '90s in here! An incredibly eclectic decade for music, the...
#101 of 632 The Greatest Live Bands of All Time 330.1k VOTES List of the greatest live bands or artists of all time, created and ranked by music fans worldwide asks the question "w...
#13 of 97 '90s Greats Making the Best Music Today 33.4k VOTES A list of 90s greats making the best music today. While many of their contemporaries have either fallen to the wayside or sp...
#7 of 94 The Best Opening Act You've Ever Seen 15.2k VOTES What are the best opening acts you've ever seen? These are the bands and musicians that blew you away, making you a fan fo...
#1 of 73 The Best Grunge Bands 47.2k VOTES The beginning of the 1990s saw a new genre of rock emerge: grunge music. Grunge bands emerged left and right, primarily from...
#14 of 136 The Best Stoner Rock Bands 22k VOTES Stoner rock, which combines elements of heavy metal, psychedelic rock, blues rock and doom metal, is one of the more deliber...
#118 of 302 The Best Ever Garage Rock Bands 19k VOTES Rock music, at its purest, rawest form is exciting, dangerous and energetic. That's why garage rock and garage rock bands re...
#4 of 101 The Best Musical Artists From Washington 1.4k VOTES Here are the best artists and bands from Washington. Seattle, the largest city in the state, is known as the birthplace of g...
#4 of 96 The Best Alternative Metal Bands 27.8k VOTES Different from other genres of heavy metal, alternative metal provides exactly what it's title describes: an alternative to ...
I Saw 100+ Bands In 2019 And Ranked Them 2.6k VIEWS Back in 2015, I unintentionally saw over 100 bands, triggering my inner ranking compulsion. My completist gene also cam...
The Best Selling Grunge Bands 12.6k VIEWS Grunge Bands were everywhere in the 90's. From Nirvana to Pearl Jam, grunge music was the most popular among teens and young...
Every Band & Musician Who Has Performed on Saturday Night Live 106.4k VIEWS Live from the main stage at 30 Rockefeller Plaza, this is a list of every band, musician, and singer who has performed on Sa...

Soundgarden is also found on...