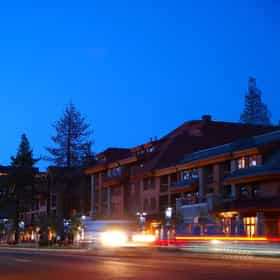 South Lake Tahoe is the most populous city in El Dorado County, California, United States, in the Sierra Nevada. As its name suggests, the city is located on the southern shore of Lake Tahoe. The city's population was 21,403 at the 2010 census, down from 23,609 at the 2000 census, though has grown by as many as 3000 people in the intervening years. The city extends about 5 miles west-southwest along U.S. Route 50, also known as Lake Tahoe Boulevard. The east end of the city, on the California-Nevada state line right next to the town of Stateline, Nevada, is mainly geared towards tourism, with T-shirt shops, restaurants, hotels, and Heavenly Mountain Resort with the Nevada casinos just ... more on Wikipedia

South Lake Tahoe is ranked on...