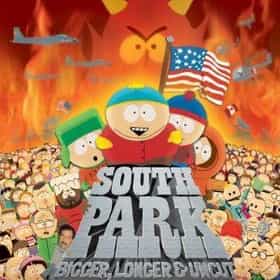 South Park: Bigger, Longer & Uncut is a 1999 American adult animated satirical musical comedy film based on the animated television series South Park, and produced, co-written by and starring its creators Trey Parker and Matt Stone. The film was directed and co-scored by Parker and co-written by their South Park collaborator Pam Brady, and co-starred Mary Kay Bergman, and Isaac Hayes as Chef. It features twelve songs by Parker and Marc Shaiman with additional lyrics by Stone. It was distributed by Paramount Pictures and Warner Bros. Pictures. The film is largely concerned with the issues of censorship and freedom of speech. ... more on Wikipedia