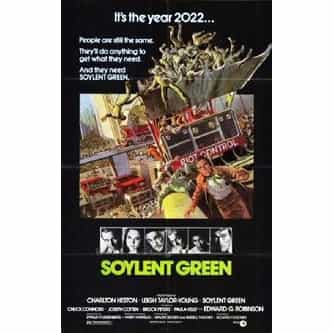 Tagline
It's the year 2022... People are still the same. They'll do anything to get what they need. And they need SOYLENT GREEN.

Soylent Green is a 1973 American science fiction film directed by Richard Fleischer and starring Charlton Heston, Leigh Taylor-Young, and, in his final film, Edward G. Robinson. The film combines the police procedural and science fiction genres, depicting the investigation into a wealthy businessman in a dystopian future suffering from pollution, overpopulation, depleted resources, poverty, and all year humidity due to the greenhouse effect. Much of the population survives on processed ... more on Wikipedia

Soylent Green IS LISTED ON