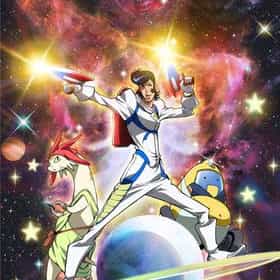 Space Dandy is a 2014 Japanese anime series produced by Bones. The series follows Dandy, an alien hunter who is "a dandy guy in space," in search for aliens with his robot assistant QT and a cat-like alien named Meow. The anime has been licensed by Funimation in North America, Madman Entertainment in Australia and by Anime Limited in the United Kingdom. The series premiered in the United States before Japan on January 4, 2014 at 11:30pm on Adult Swim's Toonami block. The series began airing in Japan on Tokyo MX at 11:00pm on January 5, 2014, followed by TV Osaka, TV Aichi, BS Fuji and AT-X. The series is also simulcasted in South East Asia at the same time as Japan on Animax ... more on Wikipedia

Space Dandy is ranked on...

#167 of 318 The Best English Dubbed Anime of All Time 977.5k VOTES If you're one of those people who only watches anime in Japanese, we don't blame you. English dubs can really ruin a series ...
#94 of 233 The Best Adult Cartoon Shows in TV History 475.1k VOTES This is a list of the best adult cartoons that ever aired, ranked by your votes. In the 1990s, cartoons with R-rated humor b...
#156 of 209 The Best Grown-Up Anime of All Time 553.6k VOTES For those of you looking for anime that is a bit more mature, like seinen anime, here's a list of the best adult anime ...
#104 of 121 The 100+ Best Anime Streaming On Hulu 193.2k VOTES Here is the list of the best anime streaming on Hulu, as determined by anime fans like you. Hulu has quite an expansive coll...
#38 of 46 Which Anime Universe Would You Want To Live In? 78.4k VOTES The diverse world-building in anime makes choosing a universe to live in an almost impossible decision, but this list o...
#35 of 68 The Best Anime With Adult Protagonists 22.2k VOTES If you are in the 18+ age group, finding an anime show that doesn't revolve around high school or the trials of adolesc...
#50 of 70 The Best Adult Swim Anime of All Time 315.6k VOTES American anime fans have a lot of fond memories watching anime on Adult Swim. You could always find the best anime on Adult ...
#18 of 24 The 24 Best Anime That Isn't Based On A Manga Series 34.2k VOTES While many of the best anime series are based on popular manga, some of them are entirely original. Believe it or not, some ...
#7 of 14 The 14 Best Anime With Standalone Episodes 1k VOTES Unlike many American cartoons, which are known for being episodic, most anime feature continuous plots. Though continuity is...
#45 of 120 The Funniest Anime Shows Ever Made 182.9k VOTES List of the funniest anime of all time, as voted on by the Ranker anime community. Although many great animes have comedy el...
#11 of 12 The Best New Anime Series For Old School Fans 2.1k VOTES If you're like a lot of adult anime fans, you may not be up to date with every cartoon release. Maybe it's because adul...
#14 of 20 All The Greatest Anime Made By Studio Bones 14k VOTES If you're into anime, you've probably heard of Fullmetal Alchemist: Brotherhood, My Hero Academia, and Ouran High ...
#13 of 18 18 Criminally Underrated Anime That Don't Get Talked About Enough 40.4k VOTES With so much anime out there, it's hard to tell what's good or what's not unless you do a bit of digging and research. In th...
#6 of 20 The 20 Best Anime About Aliens 1.1k VOTES Whether they're abducting and attacking humans or opening the door to unfathomable new worlds, aliens can spice up any story...
#12 of 13 The 13 Most Breathtaking Sakuga Scenes In All Of Anime 699 VOTES We've all been there: you're watching an anime with seemingly bland animation when all of a sudden it turns into a...
#5 of 20 The Best Anime Like Outlaw Star 275 VOTES If you enjoyed Outlaw Star and are looking for similar anime, you're in luck as there are a number to choose from. This list...
#10 of 27 The Best Space Western TV Shows 777 VOTES The best space western shows can range from very western with some sci-fi elements to mostly science fiction with some class...
#4 of 76 The Best Alien Anime 115 VOTES List of the best alien anime, voted on by Ranker's anime community. This may not be the most popular genre of Japanese anima...