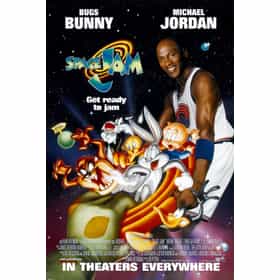 Space Jam is a 1996 American live-action/animated sports family/comedy film starring basketball player Michael Jordan and featuring the Looney Tunes characters. The film was produced by Ivan Reitman, and directed by Joe Pytka, with Tony Cervone and Bruce W. Smith directing the animation. Nigel Miguel was a basketball technical advisor. Released theatrically by Warner Bros. under the Family Entertainment label on November 15, 1996, it includes an alternate story of what happened between Jordan's initial retirement from the NBA in 1993 and his comeback in 1995, this time with him being inspired by events including Bugs Bunny and friends. Despite mixed critical reviews, Space Jam opened ... more on Wikipedia

Space Jam Is The Craziest Kids Movie Ever Made And We Should Be Grateful For It 42.1k views Space Jam is the best movie ever, right? Weeeeellll, it's actually kinda not. But history certainly remembers it that way! I...
'Space Jam' Was A '90s Fever Dream With Cynical Origins 232.3k views Most people who grew up in the '90s already have their Space Jam facts and figures memorized, but they may not realize the s...

Space Jam is ranked on...

Space Jam is also found on...