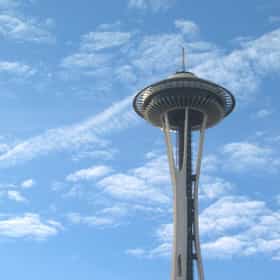 The Space Needle is an observation tower in Seattle, Washington, a landmark of the Pacific Northwest, and an icon of Seattle. It was built in the Seattle Center for the 1962 World's Fair, which drew over 2.3 million visitors, when nearly 20,000 people a day used its elevators. Once the tallest structure west of the Mississippi River, it is 605 ft high, 138 ft wide, and weighs 9,550 tons. It is built to withstand winds of up to 200 miles per hour and earthquakes of up to 9.1 magnitude, as strong as the 1700 Cascadia earthquake. It also has 25 lightning rods. It has an observation deck at 520 ft and a gift shop with the rotating SkyCity restaurant at 500 ft. The downtown Seattle skyline, ... more on Wikipedia

Space Needle is ranked on...

#15 of 28 The Biggest Tourist Traps on Earth 131.7k VOTES If you’re big on traveling, then you’ve undoubtedly come across a few tourist traps in your time. Whether you’ve been sucked...
#116 of 193 Historical Landmarks to See Before You Die 76.9k VOTES Historical places to visit before you die, ranked by history and travel buffs worldwide. Anyone can vote on this list of fam...
#40 of 217 People who voted for Space Needle... also upvote Pirates of the Caribbean Franchise on The Most Rewatchable Movies also upvote Star Wars Franchise on The Best Epic Movies The Best Tourist Attractions in America 41.4k VOTES The best tourist attractions in America are the most loved and most visited places to see in the United States. Visited by m...
#20 of 21 The Construction of the Most Iconic Landmarks on Earth 14k VOTES Rome wasn't built in a day, and neither were some of the most famous structures on Earth. From the Berlin Wall to the Golden...

Space Needle is also found on...