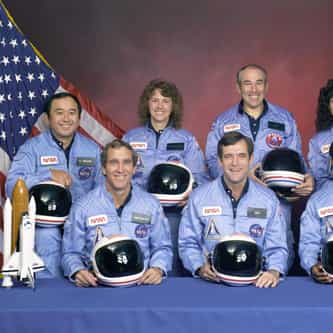 The Space Shuttle Challenger disaster occurred on January 28, 1986, when the NASA Space Shuttle orbiter Challenger broke apart 73 seconds into its flight, leading to the deaths of its seven crew members, which included five NASA astronauts and two payload specialists. The spacecraft disintegrated over the Atlantic Ocean, off the coast of Cape Canaveral, Florida at 11:38 EST. Disintegration of the vehicle began after an O-ring seal in its right solid rocket booster failed at liftoff. The ... more on Wikipedia