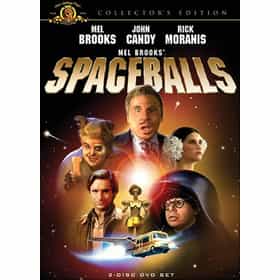 Spaceballs is a 1987 American parody film co-written and directed by Mel Brooks and starring Brooks, Bill Pullman, John Candy and Rick Moranis. It also features Daphne Zuniga, Dick Van Patten, and the voice of Joan Rivers. It was released by Metro-Goldwyn-Mayer on June 24, 1987, and was met with a mixed reception. It later became a cult classic on video and one of Brooks's most popular films. Its plot and characters parody the original Star Wars trilogy, as well as other sci-fi franchises including Star Trek, Alien, and the Planet of the Apes films. In addition to Brooks in a supporting role, the film also features Brooks regulars Dom DeLuise and Rudy De Luca in cameos. ... more on Wikipedia

Feel The Schwartz With The Funniest 'Spaceballs' Quotes 100 votes Strap on your helmet and enjoy the most hilarious quotes from Spaceballs. Directed by Mel Brooks, the 1987 Star Wars parody ...

Spaceballs is ranked on...

Spaceballs is also found on...