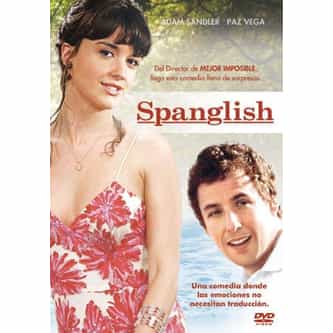 Tagline
A comedy with a language all its own.
Every family has a hero.

Spanglish is a 2004 American comedy-drama film written and directed by James L. Brooks, and starring Adam Sandler, Paz Vega, and Téa Leoni. It was released in the United States on December 17, 2004 by Columbia Pictures and by Gracie Films, and in other countries over the first several months of 2005. This film grossed $55,041,367 worldwide, significantly less than the $80 million production budget. ... more on Wikipedia

What Happens in Vegas

Four Weddings and a Funeral

Spanglish IS LISTED ON