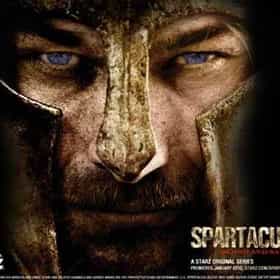 Spartacus: Blood and Sand is the title of the first and most critically acclaimed season of Spartacus, a television series that premiered on Starz on January 22, 2010. The series was inspired by the historical figure of Spartacus, a Thracian gladiator who from 71 to 73 BC led a major slave uprising against the Roman Republic. Executive producers Steven S. DeKnight and Robert Tapert focused on structuring the events of Spartacus' obscure early life leading up to the beginning of historical records. ... more on Wikipedia

lists about Spartacus: Blood and Sand

Why Spartacus Is More Groundbreaking And Hardcore Than Game Of Thrones 12.1k votes Game of Thrones is lone of the most beloved prestige shows in recent television history. It has amazing characters, wild plo...

Spartacus: Blood and Sand is ranked on...

#89 of 383 People who voted for Spartacus: Blood and Sand... also upvote Lord of the Rings Franchise on The Best Movies of All Time also upvote Dark Knight Franchise on The Best Movies of All Time The Best TV Shows of The Last 20 Years 1.5M VOTES This best TV show list represents the combined opinions of thousands of TV fans. Anyone can vote on this list of the best TV...
#112 of 158 Shows with the Best Freakin' Series Finales of All Time 264.7k VOTES This list of the best series finales in television is a somber reminder that no matter how much you love a TV character or a...
#30 of 123 TV Shows with the Hottest Casts 183.8k VOTES List of TV shows with the hottest casts. This list of the sexiest ensembles on television includes popular primetime dramas ...
#36 of 44 What to Watch If You Love 'The Last Kingdom' 376 VOTES If you just finished The Last Kingdom and feel like it’s left a gaping hole in your life, there’s no need to despair. We’ve ...
#1 of 22 TV Shows with More Nudity than Game of Thrones 18.2k VOTES Game of Thrones is not only one of the best HBO shows, but also it's a show full of hot people walking around with litt...
#43 of 49 What to Watch If You Love 'Outlander' 780 VOTES Outlander kept viewers on the edge of their seats with a harrowing tale of a woman who is thrust out of her own time, so it'...
#11 of 51 What to Watch If You Love 'Ray Donovan' 232 VOTES Wondering what to watch after Ray Donovan? If seasons of intense drama about fixing the crimes of powerful people in this se...
#16 of 118 People who voted for Spartacus: Blood and Sand... People under 30 are 3x more likely to vote for this The Best Historical Drama TV Shows 63.4k VOTES Learn about real-world history while you binge watch the best historical drama shows on television. Some of the greatest TV ...
#15 of 34 The Best 2010s Historical Drama Series 8.5k VOTES These are they best 2010s historical drama series, ranked from best to worst by user votes. From some good 2010s historical ...
#25 of 91 The Best Period Piece TV Shows 16k VOTES The very best period piece shows on television, ranked from best to worst. This list of the greatest period piece shows. The...
#1 of 4 The Best Seasons of 'Spartacus' 848 VOTES All the seasons of Spartacus have been great, but which seasons really stand out? The tyranny of the Roman Empire proves to ...
The Top 7 Manliest Swordfights in Film History 222.8k VIEWS Scenes of swordplay have been entertaining filmgoers since long before the days of the nickelodeon. Old sword fighting movie...

Spartacus: Blood and Sand is also found on...