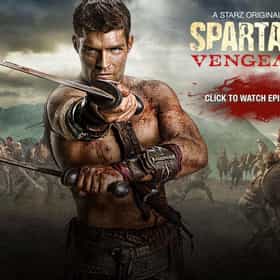 Spartacus: Vengeance is the title of the second season of Spartacus, a New Zealand produced, Starz television series, which follows Spartacus: Blood and Sand. It premiered on January 27, and concluded on March 30, 2012. Its story follows Spartacus, after he and his fellow gladiators kill their master Batiatus and escape from his ludus, or gladiatorial training school. Cast members and characters who return from the first season include Lucy Lawless as Lucretia, Peter Mensah as Oenomaus, Manu Bennett as Crixus, Dan Feuerriegel as Agron, Nick E. Tarabay as Ashur, Viva Bianca as Ilithyia, and Craig Parker as Gaius Claudius Glaber. Dustin Clare also reprises his role as Gannicus from ... more on Wikipedia

Why Spartacus Is More Groundbreaking And Hardcore Than Game Of Thrones 11.9k votes Game of Thrones is lone of the most beloved prestige shows in recent television history. It has amazing characters, wild plo...

Spartacus: Vengeance is ranked on...

#160 of 780 People who voted for Spartacus: Vengeance... also upvote Thor: Ragnarok on Most Anticipated New Movies also upvote Thor Franchise on Most Anticipated New Movies The Best TV Shows to Binge Watch 1.2M VOTES Bored? Not anymore! These are the best TV shows for binge-watching. The greatest television shows in the world are ranked he...
#26 of 44 What to Watch If You Love 'Vikings' 263 VOTES Wondering what to watch after Vikings? If the epic fantasy historical fiction series has you hungry for more swords, axes, a...
#14 of 44 What to Watch If You Love 'The Last Kingdom' 130 VOTES If you just finished The Last Kingdom and feel like it’s left a gaping hole in your life, there’s no need to despair. We’ve ...
#63 of 70 The Best TV Shows That Aired in 2012 9k VOTES Now that 2012 is over, which shows stand out from the past year? Which just need to be wrapped up already? Vote now!
#25 of 116 The Best Historical Drama TV Shows 58.9k VOTES Learn about real-world history while you binge watch the best historical drama shows on television. Some of the greatest TV ...
#69 of 362 The Best Streaming Netflix TV Shows 5.3M VOTES The best streaming Netflix TV shows include some great television dramas, sci-fi/adventure shows, sitcoms, and reality TV pr...
#19 of 57 The Best Historical Fiction TV Shows 14.2k VOTES This is a list of the best historical fiction shows on television, ranked from best to worst. Whether dramas, comedies, or a...
#4 of 4 The Best Seasons of Spartacus 799 VOTES List of the best seasons of Spartacus, listed from best to worst with DVD cover pictures when available. Television fans fro...
#5 of 35 The Best Starz! TV Shows 8.2k VOTES This list of the top current and cancelled Starz! TV series includes the date when each show first aired, as well as which a...

Spartacus: Vengeance is also found on...