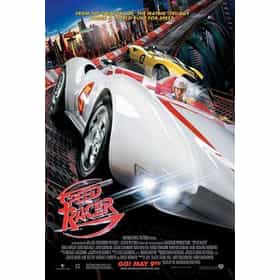 Speed Racer is a 2008 American sports action film based on the Japanese anime and manga series of the same name by Tatsunoko Productions. The film was written and directed by The Wachowskis, and stars Emile Hirsch, Christina Ricci, John Goodman, Susan Sarandon, Matthew Fox, Benno Fürmann, Hiroyuki Sanada, Rain and Richard Roundtree. The plot revolves around Speed Racer, an 18-year-old automobile racer who follows his apparently deceased brother's career. His choice to remain loyal to his family and their company Racer Motors causes difficulties after he refuses a contract offered by E.P. Arnold Royalton, the owner of Royalton Industries. The film had been in development since ... more on Wikipedia

Speed Racer is ranked on...

Speed Racer is also found on...