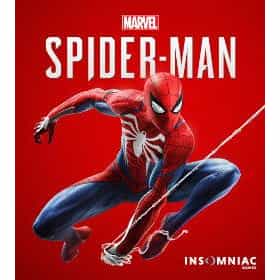 Spider-Man is an action-adventure game based on the Marvel Comics superhero Spider-Man, developed by Insomniac Games and published by Sony Interactive Entertainment for PlayStation 4. It will be the first licensed game developed by Insomniac. The game will tell a new story about Spider-Man that is not tied to an existing comic book, video game, or film. It will cover both the Peter Parker and Spider-Man aspects of the character and will feature an older and more experienced Spider-Man. The game is scheduled to be released worldwide on September 7, 2018. ... more on Wikipedia

#796 of 1,588 The 100+ Best Video Games of All Time, Ranked by Fans 1M VOTES These are the greatest games of all time, as voted on and reranked by gamers like yourself. Video games are more popular tha...
#4 of 62 The Best PlayStation 4 Games Of The 2010s 11.6k VOTES There are hundreds of amazing PS4 games that have been released this decade, but which are the best? The PlayStation 4’s lib...
#6 of 168 The Best Video Games Of The 2010s, Ranked 114.9k VOTES With so many awesome titles and ground-breaking releases, it’s definitely been a good decade for gamers. While it might be h...
#54 of 94 Video Games That Should Be Movies 39.8k VOTES What video games should be movies? Several of the most well known and popular video games of all time could easily be made i...
#16 of 102 Licensed Games That Actually Live Up to the Source Material 8.7k VOTES Which licensed video games are actually worthy of the properties on which they're based? There are so many Star Wars games a...
#6 of 27 The Most Popular Adventure Games Out Now 2.2k VOTES Adventurers, unite. We’re ranking the best adventure games right now in 2019. If you're someone who's looking for more than ...
#13 of 158 The Best Comic Book Based Video Games 20.7k VOTES Video games are about the closest you can get to becoming someone else, you know, without all the surgery and name changing ...
#3 of 36 The Most Popular Single Player Games Out Now 2k VOTES What are the hottest single-player games that people are playing right now? While some games are better with frien...
#1 of 120 The Best Marvel Games Ever, Ranked 8.5k VOTES If you're a fan of the comic books or the MCU, then you'll enjoy the best Marvel video games ever made. Featuring classic&nb...
#1 of 23 The Best PS4 Games For Teens 875 VOTES Teenagers everywhere, we’re ranking the best PS4 games for teens. There are tons of games that have been developed for teena...
#7 of 25 25 Games You Need To Play If You Love 'The Outer Worlds' 131 VOTES The action RPG is one of the most well-populated (and well-loved) genres in gaming, and The Outer Worlds is one of the best ...
#3 of 41 The Best PS4 Games Of 2018, Ranked 1.3k VOTES Gamers everywhere, we're ranking the best new PlayStation 4 games of 2018. Featuring some of the most popular PS4 games...
#3 of 22 The Most Popular Superhero Video Games Right Now 397 VOTES For those who love comic books and the caped crusaders within, we're ranking the most popular superhero games&nbsp...
#1 of 19 The Best Action-Adventure Games Of 2018, Ranked 411 VOTES Here are the best new action-adventure games of 2018, ranked by gamers everywhere. Featuring sci-fi, fantasy, horror, and op...