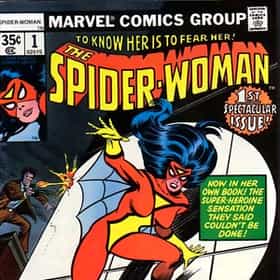 Spider-Woman (Jessica Drew) is a fictional superheroine that appears in comic books published by Marvel Comics. The character first appeared in Marvel Spotlight #32, and 50 issues of an ongoing series titled Spider-Woman followed. At its conclusion she was killed, and though later resurrected in an Avengers story arc, she fell into disuse, supplanted by other characters using the name Spider-Woman. Writer Brian Michael Bendis added Spider-Woman to the roster of the high profile New Avengers. In 2009, the character received her second self-titled limited series, written by Bendis, which ran for seven issues. As part of the Spider-Verse event, Spider-Woman will receive her third ongoing ... more on Wikipedia

Spider-Woman (Jessica Drew) is ranked on...