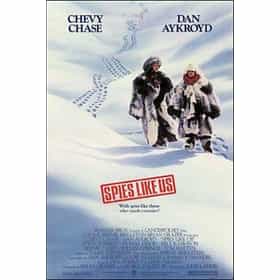 Spies Like Us is a 1985 American comedy film directed by John Landis and starring Chevy Chase, Dan Aykroyd, Steve Forrest, and Donna Dixon. The film presents the comic adventures of two novice intelligence agents sent to the Soviet Union. Originally written by Aykroyd and Dave Thomas to star Aykroyd and John Belushi at Universal, the script went into turnaround and was later picked up by Warner Bros. with Aykroyd and Chevy Chase starring. The film is a homage to the famous Road to … movie series which starred Bob Hope and Bing Crosby. Hope himself makes a cameo in one scene. Other cameos in the film include directors Terry Gilliam, Sam Raimi, Costa-Gavras and Joel Coen, musician B. B. ... more on Wikipedia