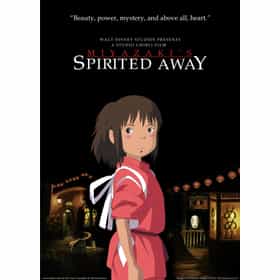 Spirited Away is a 2001 Japanese animated fantasy film written and directed by Hayao Miyazaki and produced by Studio Ghibli. The film stars Rumi Hiiragi, Miyu Irino, Mari Natsuki, Takeshi Naito, Yasuko Sawaguchi, Tsunehiko Kamijō, Takehiko Ono and Bunta Sugawara, and tells the story of Chihiro Ogino, a sullen ten-year-old girl who, while moving to a new neighborhood, enters the spirit world. After her parents are transformed into pigs by the witch Yubaba, Chihiro takes a job working in Yubaba's bathhouse to find a way to free herself and her parents and return to the human world. Miyazaki wrote the script after he decided the film would be based on his friend, associate producer Seiji ... more on Wikipedia

lists about Spirited Away

Spirited Away is ranked on...

Spirited Away is also found on...