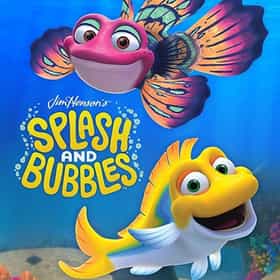 Splash and Bubbles (originally titled Splash!) is an American computer-animated children's television series created by John Tartaglia. follows a yellowback fusilier (though at times he and the narrator claim that he is a yellowtail fusilier), Splash, who settles in Reeftown after looking all over the ocean. He then befriends Bubbles, a mandarin dragonet, and the duo, along with friends Dunk and Ripple, explore the reef to venture and make new friends. Each episode also includes a documentary segment, Get Your Feet Wet, which features kids asking questions that are occasionally followed up by a musical number. ... more on Wikipedia

Splash and Bubbles is ranked on...

#94 of 96 The Best New Animated TV Shows of the Last Few Years 89.3k VOTES With so many great TV series currently airing, we’re ranking the best animated TV shows since 2015. Our list of the highest ...
#58 of 78 The Best PBS Kids TV Shows Ever, Ranked 106.4k VOTES If you were a kid in the 90s or 2000s, you probably have seen several of the best PBS kids TV shows. Many of those PBS kids ...
#9 of 14 The Best Current PBS Kids Shows 411 VOTES Wondering what to watch on PBS Kids? If you have young children, you're likely looking for some family friendly program...
#25 of 35 Good TV Shows for Babies 1.2k VOTES Although many parents limit screen time for children under a certain age, many also choose fun and educational shows for the...