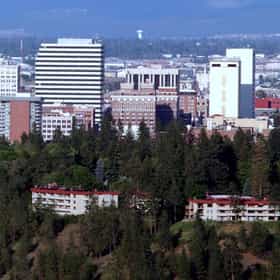 Spokane is a city in the state of Washington, in the northwestern United States. It is the seat of Spokane County. It is located on the Spokane River west of the Rocky Mountain foothills in eastern Washington, 92 miles south of the Canadian border, approximately 20 miles from the Washington–Idaho border, and 232 miles east of Seattle along Interstate 90. The city and wider Inland Northwest region is served by Spokane International Airport, 5 miles west of downtown Spokane. According to the 2010 Census, Spokane had a population of 208,916, making it the second largest city in Washington and the 102nd largest city in the United States. The first humans to live in the area, the Spokane ... more on Wikipedia

Spokane is ranked on...

Spokane is also found on...