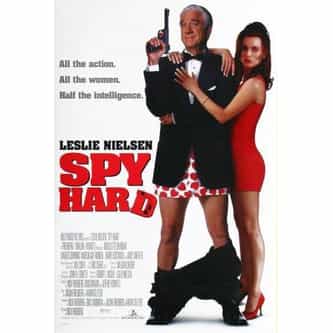 Tagline
All the action. All the women. Half the intelligence.

Spy Hard is a 1996 American spy comedy film parody starring Leslie Nielsen and Nicollette Sheridan, parodying James Bond films and other action films. The introduction to the movie is sung by comedy artist "Weird Al" Yankovic. It is the first film to be written by Jason Friedberg and Aaron Seltzer. ... more on Wikipedia

Spy Hard IS LISTED ON