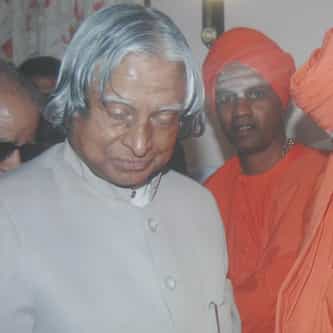 Shivakumara Swami (born Shivanna; 1 April 1907 – 21 January 2019) was an Indian supercentenarian, humanitarian, spiritual leader and educator. He was a Lingayat religious figure, he joined the Siddaganga Matha in 1930 Karnataka and became head seer from 1941. He also founded the Sri Siddaganga Education Society. Described as the most esteemed adherent of Lingayatism, he was referred to as Nadedaaduva Devaru (walking God) in the state.Before his death at the age of 111 years, 295 days, he ... more on Wikipedia

Shivakumara Swamiji IS LISTED ON