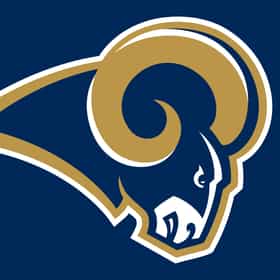 The Los Angeles Rams are a professional American football team based in the Los Angeles metropolitan area. The Rams compete in the National Football League (NFL), as a member club of the league's National Football Conference (NFC) West division. The Rams franchise has won three NFL championships, and is the only franchise to win championships while representing three different cities (Cleveland in 1945, Los Angeles in 1951, and St. Louis in 1999). The Rams play their home games at the Los Angeles Memorial Coliseum in Los Angeles, California. The franchise began in 1936 as the Cleveland Rams, located in Cleveland, Ohio. The club was owned by Homer Marshman and featured players such as ... more on Wikipedia

Los Angeles Rams is ranked on...

#98 of 222 The Best Sport Team Names 33.9k VOTES These are the best sports team in organized team sports, as ranked by the wisdom of the crowd. Anyone can contribute to this...
#30 of 32 Which Team Won The 2019 NFL Draft? 2.5k VOTES Every NFL team needs to improve to win the Super Bowl, and the NFL draft is among the most important ways a franchise can im...
#10 of 32 People who voted for Los Angeles Rams... also upvote Star Trek Franchise on The Best Star Trek Movies also upvote Calvin Johnson on The Best Wide Receivers of All Time The Greatest NFL Teams 136.3k VOTES The greatest NFL teams are those professional football teams beloved by fans and often hated by rivals. These teams are ofte...
#35 of 35 NFL Predictions: Things Most Likely To Happen During The 2019 Season 595 VOTES The New England Patriots ground down the Los Angeles Rams in a famously boring Super Bowl in February, and with the new foot...
#3 of 32 Who Do You Think Will Win Super Bowl LIII? 57.9k VOTES With the 2018 NFL draft concluded, there's now plenty of time and reason to start projecting who will win Super Bowl LIII - ...
#12 of 32 Who Was the Most Disappointing NFL Team of 2016? 2.1k VOTES Not every NFL team can play in the Super Bowl, let alone make the playoffs. Every season, football fans have high ...
#20 of 32 What Team Will Win Super Bowl 50? 6.1k VOTES With the 2015 NFL season coming to a close, it's time to ask the big question on the minds of millions of football fans out ...
#5 of 32 Who Do You Think Will Win Super Bowl LII? 509 VOTES It's no secret America loves football and with the biggest game of the season getting closer each day, the internet is awash...
#7 of 23 Teams That Most Regret Getting Rid of Future Stars 1.5k VOTES Predicting the future is almost impossible to do, so when it comes to making multi-million dollar decisions and determining ...
#15 of 32 The Best Fantasy Football Defenses Of 2019 271 VOTES The fantasy football rankings of defenses are always among the toughest aspects of drafting each year. While you're focused ...