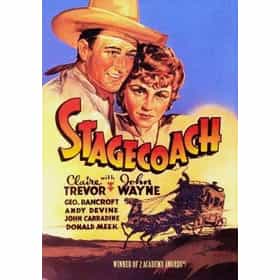 Stagecoach is a 1939 American Western film directed by John Ford, starring Claire Trevor and John Wayne in his breakthrough role. The screenplay, written by Dudley Nichols, is an adaptation of "The Stage to Lordsburg", a 1937 short story by Ernest Haycox. The film follows a group of strangers riding on a stagecoach through dangerous Apache territory. Stagecoach was the first of many Westerns that Ford shot using Monument Valley, in the American south-west on the Arizona–Utah border, as a location, many of which also starred John Wayne. Scenes from Stagecoach, including a famous sequence introducing John Wayne's character the Ringo Kid, blended shots of Monument Valley with ... more on Wikipedia

Stagecoach is ranked on...

Stagecoach is also found on...