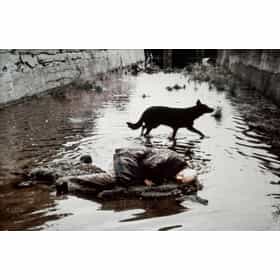 Stalker is a 1979 art film directed by Andrei Tarkovsky, with its screenplay written by Boris and Arkady Strugatsky. Loosely based on the novel The Roadside Picnic, the film features a mixture of elements from the science fiction genre with dramatic philosophical and psychological themes. It depicts an expedition led by a figure known as the 'Stalker' to take his two clients, a melancholic writer seeking inspiration and a professor seeking scientific discovery, to a site known simply as the 'Zone', which has a place within it with the supposed ability to fulfill a person's innermost desires. ... more on Wikipedia

Stalker is ranked on...

Stalker is also found on...