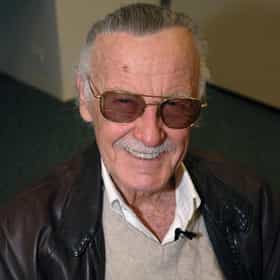 Stan Lee (born Stanley Martin Lieber ; December 28, 1922 – November 12, 2018) was an American comic book writer, editor, publisher, and producer. He rose through the ranks of a family-run business to become Marvel Comics' primary creative leader for two decades, leading its expansion from a small division of a publishing house to a multimedia corporation that dominated the comics industry. In collaboration with others at Marvel—particularly co-writer/artists Jack Kirby and Steve Ditko—he co-created numerous popular fictional characters, including superheroes Spider-Man, the X-Men, Iron Man, Thor, the Hulk, the Fantastic Four, Black Panther, Daredevil, Doctor Strange, Scarlet Witch and ... more on Wikipedia

The Best Comic Book Characters Created by Stan Lee 100.4k votes Stan "The Man" Lee is the most iconic and innovative comic creators of all time. He invented, or had a part in cre...
The DC Universe Has Been Taking Shots At Stan Lee In Their Comics For Decades 8.7k views Stan Lee has long been the public face of Marvel Comics, but avid readers know that Lee is only one half of the Marvel story...
Marvel Film Stars React To Stan Lee's Death 12.9k views Marvel Comics legend, pop culture godfather, and king of the cameo Stan Lee passed away Monday, November 12, 2018, at the ag...

Stan Lee is ranked on...

#267 of 332 The Coolest Actors Ever 747.3k VOTES As movie fans, we like to think of our favorite actors as being larger than life. With all of the coverage that these stars ...
#305 of 926 People We Wish Were Still Alive 3.3M VOTES RIP to our world's greatest achievers, those who changed the way we live and the ways we thought. This list of people we wis...
#131 of 469 Famous Role Models We'd Like to Meet In Person 537.9k VOTES These are the famous folks it would be most exciting to meet in person, as ranked by the wisdom of the crowd. Some of the be...
#137 of 2,830 The Most Influential People of All Time 2.4M VOTES This is a list of the most influential people of all of human history. This means that the individuals on this list have had...
#55 of 525 Famous Men You'd Want to Have a Beer With 1.8M VOTES If given the opportunity to sit down for a beer with any famous male figure, which famous men would you most want to get a d...
#8 of 313 Famous People Most Likely to Live to 100 13.5k VOTES Sometimes, age really is just a number. But these healthy old celebrities seem to be defying time like no others. These clas...
#21 of 113 The Most Influential Contemporary Americans 141.6k VOTES A list of the Americans who have had the most central influence on, or importance to, the modern era. This would include Ame...
#19 of 75 The Greatest Guest Appearances in The Simpsons History 8.2k VOTES With 25+ seasons completed and seemingly no end in sight, there is certainly no shortage on the number of celebrity guest st...
#38 of 184 Celebrities You Feel Like You Know 22.7k VOTES Everyone has a favorite celebrity who they think just gets them. You know, those celebrities you feel like you know. Wheth...
#6 of 28 The Coolest Celebrity Responses to Fan Letters 4.9k VOTES Admit it, you have a favorite celebrity. But as much as most people love their favorite celebs, only a select few have eve...
#37 of 1,452 Celebrity Death Pool 2018 477.7k VOTES Welcome to Celebrity Death Pool 2018! In increasingly uncertain times, there remains one constant in life - we all die. Cele...
#1 of 21 The Best Spider-Man Comic Book Writers 2.8k VOTES Comic book writers are oftentimes some of the most under-appreciated artists. Every panel, every speech bubble, every t...
#11 of 65 Who Was America's Grandpa in 2015? 3.5k VOTES Grandfathers loom large over America. They teach us how to fish, how to ride a bike, and even how to whittle (depending on h...
#21 of 36 The Best Stan Lee Cameos 3.1k VOTES A Stan Lee cameo is just as iconic to the Marvel film universe as the characters that lead the films. Plus, he gets to do th...
Celebrities You Didn't Know Use Stage Names 1.8M VIEWS List of celebrities with stage names, loosely ranked according to fame and popularity. It's tough to break into show busin...
Famous People Named Stan & Stanley 17.9k VIEWS If your name is Stanley, then you're in some great company. Here's our list of the most famous people named Stan & Stanl...
Famous Authors Who Used Pen Names 47.5k VIEWS Think you really know your favorite author? It may be surprising to you to learn that a number of famous authors are actuall...
Tiny Movie Cameos By Super Famous People 198.3k VIEWS Some actors have perfected the art of making a cameo. They can drop in and blow your mind in five minutes or less and s...
Noted Celebrities Who Have Filed for Bankruptcy Protection 106.2k VIEWS Top celebrities that went broke is a list of famous people that have had to file bankruptcy. These are the Hollywood stars, ...

Stan Lee is also found on...