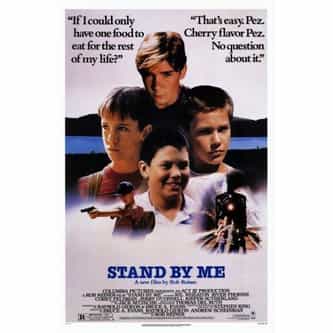 Stand by Me is a 1986 American coming of age comedy-drama adventure film directed by Rob Reiner and starring Wil Wheaton, River Phoenix, Corey Feldman and Jerry O'Connell. Based on the novella The Body, written by Stephen King, the title is derived from the Ben E. King song of the same name, which plays over the end credits. The film tells the story of four boys who go on a hike across the countryside to find the body of a missing child. ... more on Wikipedia

lists about Stand by Me

168.4k readers Behind-The-Scenes Stories From 'Stand By Me' That Prove The Film Shaped The Child Actors

247 votes The Most Memorable 'Stand by Me' Quotes

Stand by Me IS LISTED ON