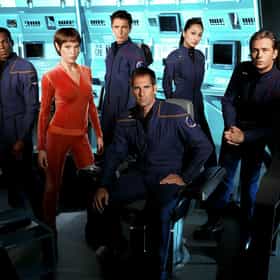 Star Trek: Enterprise is a science fiction TV series and a prequel to the original Star Trek. The series premiered September 26, 2001, on the UPN television network with the final episode airing on May 13, 2005. It was the last Star Trek program to end its run on television. The show is set in the nearby regions of the Milky Way galaxy, beginning in 2151 when Jonathan Archer becomes the captain of the Enterprise. It ends in 2161 with the formation of Starfleet Academy and the United Federation of Planets. The series takes place aboard the starship Enterprise NX-01, Earth's first warp-5-capable ship, which has been designed for long-range exploration of the galaxy. ... more on Wikipedia

Star Trek: Enterprise is ranked on...

#262 of 779 The Best TV Shows to Binge Watch 1.2M VOTES Bored? Not anymore! These are the best TV shows for binge-watching. The greatest television shows in the world are ranked he...
#16 of 322 The Best Sci Fi Television Series of All Time 930.7k VOTES Here is a list of the best sci-fi shows and best sci-fi series of all time, as ranked by hundreds of Ranker voters. Thi...
#79 of 253 The Greatest TV Dramas of All Time 158.6k VOTES The greatest TV dramas of all time are the ones that make you feel connected to characters you will never meet in real life ...
#177 of 594 The Best TV Theme Songs of All Time 319.1k VOTES The best TV theme songs and TV intros of all time will take you back to some of the greatest moments in TV. Television theme...
#133 of 408 The Best TV Shows to Rewatch 131.2k VOTES List of the best TV shows to rewatch, as ranked by television fans and critics. When the weekend comes around and you can’t ...
#116 of 281 The Best Cult TV Shows of All Time 218.2k VOTES List of the best cult TV shows ever, ranked by their loyal fans. TV series that develop cult followings are known for their ...
#34 of 101 The Best TV Spinoffs 33.9k VOTES What are the very best TV spin-offs in history? This list definitely includes many. Some of the best TV spin-off shows were,...
#118 of 395 TV Shows That Only Smart People Appreciate 1.3M VOTES Since about the early 2000s, TV audiences have been blessed with what many experts call The Golden Age of Television. In oth...
#7 of 15 The Best Current TV Shows About Space 3k VOTES As the mysterious final frontier that is space continues to fascinate those of us on earth, there continue to be many curren...
#11 of 85 The Worst TV Theme Songs 22.5k VOTES List of worst TV theme songs ever, ranked by the people who had to listen to them before every episode. One of the mo...
#97 of 123 TV Shows with the Hottest Casts 178.5k VOTES List of TV shows with the hottest casts. This list of the sexiest ensembles on television includes popular primetime dramas ...
#8 of 14 The Best 22nd-Century Stories In Science Fiction You Need To Watch 669 VOTES Science fiction is so vast - it has spawned a seemingly endless selection of sub-genres, including 22nd-century sci-fi....
#14 of 26 TV Shows and Movies with the Best Use of Airlocks 1.1k VOTES There's that classic moment in so many sci-fi films and TV shows where the vacuum of space pulls at our heroes (or the villa...
#12 of 21 All 21 Star Trek Series & Movies, Ranked by Trekkies 8.6k VOTES Between TV shows and films, it’s safe to say Star Trek has become a fundamental pillar of our culture. The best Star Tr...
#104 of 154 The All-Time Greatest TV Pilots 230.5k VOTES The greatest TV pilots of all-time are single episodes of television that introduced us to what would soon be iconic charact...
#31 of 128 Canceled Shows We'd Most Like to See as Movies 204.9k VOTES This list of canceled shows we'd like to see as movies includes a lot of huge cult favorites. Obviously this list isn't comp...
#28 of 82 TV Shows You Wish You Were a Character On 11.7k VOTES You don't just love your favorite TV series; you're obsessed with them. You don't just want to watch them over and over agai...
#206 of 476 The Best Television Shows of the 2000s 144.9k VOTES Some great TV shows came out of the 2000s, while some have even lived on. Here's a list of the best shows that aired from 20...
#16 of 57 The Most Exciting Sci-Fi Series Ever Made 2.9k VOTES The top sci-fi TV shows ever aired are some of the most exciting and thought-provoking to watch on television, but which is ...
#6 of 63 The Best Sci-Fi Action Series Ever 2k VOTES The best science fiction action shows are a perfect storm of futuristic imagination and out-of-this-world excitement. The be...
#4 of 97 The Greatest TV Shows Set in the Future 2k VOTES Blast forward in time and help rank the best TV shows set in the future. Since the early days of television, futuristic them...
#53 of 364 The Best Streaming Netflix TV Shows 5.3M VOTES The best streaming Netflix TV shows include some great television dramas, sci-fi/adventure shows, sitcoms, and reality TV pr...
#12 of 33 The Greatest TV Shows About Technology 882 VOTES The one thing that remains ubiquitous in all our lives is technology, and you might even say the same for shows about techno...
#11 of 24 The Best Military Science Fiction TV Shows 5.4k VOTES The very best military science fiction shows on television, ranked from best to worst. This list of the greatest military sc...
#13 of 27 The Best Space Western TV Shows 770 VOTES The best space western shows can range from very western with some sci-fi elements to mostly science fiction with some class...
#9 of 26 The Best Spin-Offs of the 2000s 348 VOTES The best 2000s spin-off series are comedies, dramas, and everything in between. These are the best of the best that aired on...