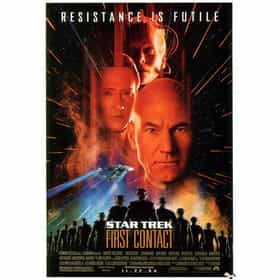 Star Trek: First Contact is a 1996 American science fiction film released by Paramount Pictures. It is the eighth feature film based on Star Trek, and the first film to feature no cast members from the original Star Trek television series of the 1960s. In the film's plot, the crew of the USS Enterprise-E travel from the 24th to 21st century to save their future after the cybernetic Borg conquered Earth by changing the timeline. ... more on Wikipedia