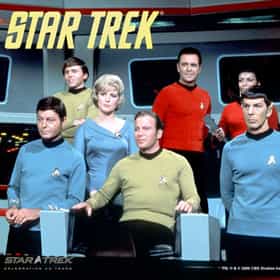 Star Trek is an American science fiction television series created by Gene Roddenberry that follows the adventures of the starship USS Enterprise and its crew. It later acquired the retronym of Star Trek: The Original Series to distinguish the show within the media franchise that it began. The show is set in the Milky Way galaxy, roughly during the 2260s. The ship and crew are led by Captain James T. Kirk, first officer and science officer Spock, and chief medical officer Leonard McCoy. Shatner's voice-over introduction during each episode's opening credits stated the starship's purpose: Space: the final frontier. These are the voyages of the starship Enterprise. Its five-year mission: ... more on Wikipedia

Star Trek: The Original Series is ranked on...

Star Trek: The Original Series is also found on...