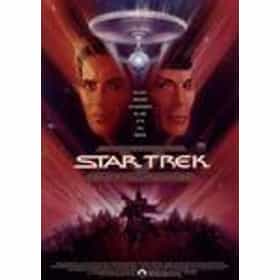 Star Trek V: The Final Frontier is a 1989 American science fiction film released by Paramount Pictures. It is the fifth feature film based on Star Trek, and a sequel to the 1966–1969 Star Trek television series. Taking place shortly after the events of Star Trek IV: The Voyage Home, the plot follows the crew of the USS Enterprise-A as they confront a renegade Vulcan, Sybok, who is searching for God at the center of the galaxy. The film was directed by cast member William Shatner, following two films directed by his co-star, Leonard Nimoy. Shatner also developed the initial storyline in which Sybok searches for God but instead finds an alien being. Series creator Gene Roddenberry ... more on Wikipedia

Star Trek V: The Final Frontier is ranked on...

Star Trek V: The Final Frontier is also found on...