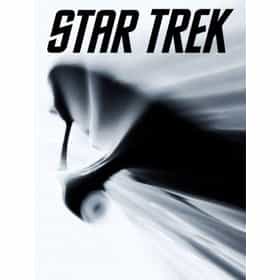 Star Trek is a 2009 science fiction film directed by J. J. Abrams, written by Roberto Orci and Alex Kurtzman, and produced by Damon Lindelof and Bryan Burk. It is the eleventh film based on the Star Trek franchise that was created by Gene Roddenberry and features the main characters of the original Star Trek series, who are portrayed by a new cast. With one original cast member appearing in the film (Leonard Nimoy) as Spock prime.  It explores the back stories of James T. Kirk (Chris Pine) , Spock (Zachary Quinto), and Leonard McCoy (Karl Urban) before they unite aboard the USS Enterprise to combat Nero (Eric Bana), a Romulan from the future who threatens the United ... more on Wikipedia

Star Wars Episode V: The Empire Strikes Back
Where Is The Cast Of 'Star Trek: The Next Generation' Now? 9.3k views When it first aired back in 1966, nobody knew Star Trek would become such a big part of science-fiction culture. Skip ahead ...
The 19 Coolest Starships In The 'Star Trek' Universe 6.5k votes Throughout the many complicated iterations of the Star Trek universe, there are entire cultures dedicated to exploration, su...
Which 'Star Trek' Character Are You, Based On Your Zodiac Sign? 12.7k views Who hasn’t wondered where they fit into the ever-expanding Star Trek universe? What began in the 1960s as a cut-and-dried sp...
The Best Q Episodes of 'Star Trek 155 votes If Jean-Luc Picard calls someone "devious and amoral and unreliable and irresponsible and...definitely not to be truste...
The Best Spock Quotes 190 votes What are the best Spock quotes that you still use today? Mr. Spock is one of the greatest characters ever written for televi...
The Best Episodes of 'Star Trek: Picard' 25 votes There may not be that many yet but even so, there are so many good episodes of Star Trek: Picard, but which have really stoo...

Star Trek is ranked on...

Star Trek is also found on...

Every Oscar Winning Film Ever Movies with Cinematography by Daniel Mindel