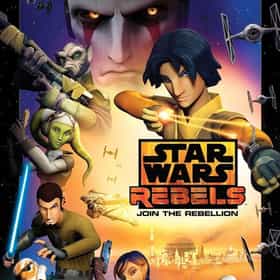 Star Wars Rebels is an American 3D CGI animated television series produced by Lucasfilm and Lucasfilm Animation. Set fourteen years after Star Wars Episode III: Revenge of the Sith and five years before Star Wars Episode IV: A New Hope, Rebels takes place during an era when the Galactic Empire is securing its grip on the galaxy. Imperial forces are hunting down the last of the Jedi Knights while a fledgling rebellion against the Empire is taking form. The visual style of Star Wars Rebels is inspired by the original Star Wars trilogy concept art by Ralph McQuarrie. It premiered as a 44-minute film, Star Wars Rebels: Spark of Rebellion, on October 3, 2014 on Disney Channel prior to the ... more on Wikipedia

Star Wars Rebels is ranked on...

#608 of 780 The Best TV Shows to Binge Watch 1.2M VOTES Bored? Not anymore! These are the best TV shows for binge-watching. The greatest television shows in the world are ranked he...
#442 of 729 The Best Cartoons of All Time 2.9M VOTES There have been many fantastic animated TV shows throughout the history, but which ones are the best? Some people think that...
#116 of 321 The Best Sci Fi Television Series of All Time 929.5k VOTES Here is a list of the best sci-fi shows and best sci-fi series of all time, as ranked by hundreds of Ranker voters. Thi...
#161 of 487 The Greatest Animated Series Ever Made 621k VOTES The top animated series of all time include some of the best TV shows ever to flicker in your living room (or on your comput...
#191 of 290 The Most Overrated TV Shows Of All Time 542.9k VOTES List of the most overrated TV shows of all time, ranked by fans, critics, and people like you. Ever since the dawn of the ...
#10 of 14 The Best Kids Shows Grown-Ups Should Be Watching 4.3k VOTES What makes a children's program stand out is when it can be enjoyed equally by both children and adults. A smart series offe...
#63 of 89 The Best TV Shows Based on Movies 85.7k VOTES List of the best TV shows based on movies. Here are the rankings of the top television series that all began with a film. Wh...
#37 of 187 The Best TV Shows You Can Watch On Disney+ 12.9k VOTES Launched in the fall of 2019, Disney+ offered new shows based on Disney, Marvel, and Star Wars properties alongside old favo...
#154 of 154 The All-Time Greatest TV Pilots 230.5k VOTES The greatest TV pilots of all-time are single episodes of television that introduced us to what would soon be iconic charact...
#27 of 38 The Best Disney Channel Cartoons Ever Made 5.2k VOTES Disney Channel has played an integral role in many people's childhoods. Whether you grew up in the 1990s or the 2000s, there...
#40 of 48 The Best New Sci-Fi Shows of the Last Few Years 45.3k VOTES With so many great TV series currently airing, we’re ranking the best sci-fi TV shows since 2015. Our list of the highest ra...
#51 of 56 The Most Exciting Sci-Fi Series Ever Made 2.8k VOTES The top sci-fi TV shows ever aired are some of the most exciting and thought-provoking to watch on television, but which is ...
#38 of 58 The Best Animated Series of the 2010s, Ranked 46.3k VOTES These are the best 2010s cartoons and animated series, ranked from best to worst by user votes. The decade was truly a great...
#37 of 61 The Best Sci-Fi Action Series Ever 1.9k VOTES The best science fiction action shows are a perfect storm of futuristic imagination and out-of-this-world excitement. The be...
#58 of 61 Good TV Shows for Tweens 1.5k VOTES Finding the best TV shows for tweens to watch can be tricky. Sure they're almost teens (almost) and want to watch something ...
#22 of 52 The Best Animated Sci-Fi & Fantasy Series Ever Made 2.8k VOTES Animated television shows have a unique ability to create truly fantastical and out of this world fantasy and science fictio...
#3 of 46 The Best Computer Animation TV Shows 1.7k VOTES The very best computer animation shows on television, ranked from best to worst. This list of the greatest computer animatio...
#5 of 40 The Best Sci-Fi Kids Shows Ever Made 485 VOTES Many kids dread going to science class at school. Plenty of us had teachers who were content with lecturing instead of letti...
#14 of 54 The Best Disney XD TV Shows 19.4k VOTES List of popular Disney XD shows, ranked from best to worst. This list of the top current and cancelled Disney XD TV series i...
#20 of 34 The Best Space Opera TV Shows 4.1k VOTES The very best space opera shows on television, ranked from best to worst. This list of the greatest space opera shows also i...
#36 of 52 The Best Action Fantasy Series Ever Made 2.4k VOTES The best action fantasy shows are a rush, perfectly pairing the excitement of an action series with the fun and imagination ...
#14 of 135 The Best ABC Shows of the 2010s 3.2k VOTES The way we watch TV may be changing, but this list of 2010s ABC shows makes it clear that network television still boasts gr...
#3 of 11 Every 'Star Wars' TV Series, Ranked 680 VOTES Although the Star Wars TV shows Star Wars: Droids and Star Wars: Ewoks (which were aired together under the more exciting na...
#44 of 67 The Best Alien TV Shows, Ranked 7.8k VOTES Whether you call them extraterrestrials or Martians, TV shows about aliens are always entertaining. The best TV shows about ...
#17 of 27 The Best Space Western TV Shows 769 VOTES The best space western shows can range from very western with some sci-fi elements to mostly science fiction with some class...
#16 of 30 Good TV Shows for 8 Year Olds 344 VOTES Figuring out the best TV shows for 8-year-olds to watch can be complicated. Right at the cusp of being a tween, they know wh...
#17 of 34 The Best Adventure Kids Shows Ever Made 294 VOTES Kids have an innate need to explore. Part of the reason why kids can't wait to grow up is that they want to leave the confin...