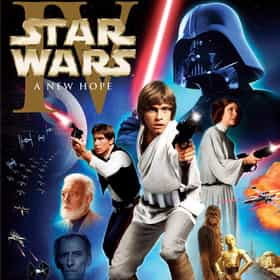 Star Wars is a 1977 American epic space opera film written and directed by George Lucas. The first release in the Star Wars franchise, it stars Mark Hamill, Harrison Ford, Carrie Fisher, Peter Cushing, and Alec Guinness. The plot focuses on the Rebel Alliance, led by Princess Leia, and its attempt to destroy the Galactic Empire's space station, the Death Star. This conflict disrupts the isolated life of ambitious farmhand Luke Skywalker when he inadvertently acquires a pair of droids that possess stolen architectural plans for the Death Star. After the Empire begins a destructive search for the missing droids, Skywalker agrees to accompany Jedi Master Obi-Wan Kenobi on a mission to ... more on Wikipedia

The Most Hated Star Wars Villains 58.5k votes The biggest villains in the Star Wars galaxy are truly among the top scum of the universe. This list of all villains from St...
How To Survive The Trash Compactor Scene In 'Star Wars' 681 views One of the most well-known scenes in the first Star Wars film involves Luke, Chewbacca, Han, and Leia escaping some blaster ...
The Best Blasters in the 'Star Wars' Saga, Ranked 3k votes It may not be the most civilized means of self-defense in the galaxy, but a powerful blaster will certainly do in a pinch as...

Star Wars is ranked on...

Star Wars is also found on...