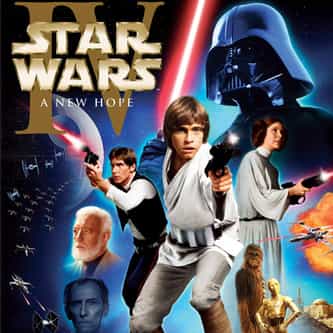 Tagline
A long time ago
in a galaxy far
far away...
It's Back! (re-release)

Star Wars is a 1977 American epic space opera film written and directed by George Lucas. The first release in the Star Wars franchise, it stars Mark Hamill, Harrison Ford, Carrie Fisher, Peter Cushing, and Alec Guinness. The plot focuses on the Rebel Alliance, led by Princess Leia, and its attempt to destroy the Galactic Empire's space station, the Death Star. This conflict disrupts the isolated life of ambitious farmhand Luke Skywalker when he inadvertently acquires a pair of droids that ... more on Wikipedia

Star Wars IS LISTED ON