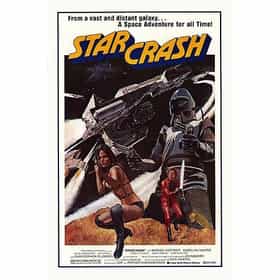 Starcrash is a low-budget Italian-American 1978 science fiction film, which was also released under the English title of The Adventures of Stella Star. The screenplay was written by Luigi Cozzi and Nat Wachsberger, and Cozzi also directed the film. The cast included Marjoe Gortner, Caroline Munro, Judd Hamilton, Christopher Plummer, David Hasselhoff, Joe Spinell and Robert Tessier The original music score was by Oscar winning composer John Barry. It was filmed in Technicolor with Dolby sound, and has a runtime of 94 minutes. The US release is 92 minutes, and received an MPAA rating of PG. The film is generally regarded by some critics as a campy B movie with cheap special effects and a ... more on Wikipedia

Starcrash is ranked on...

Starcrash is also found on...