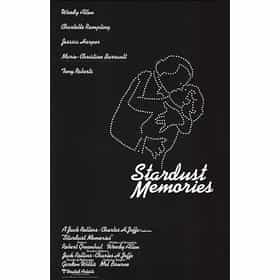 Stardust Memories is a 1980 American comedy-drama film written and directed by Woody Allen and starring himself, Charlotte Rampling, Jessica Harper, Marie-Christine Barrault and Sharon Stone in her film debut. The film is about a filmmaker who recalls his life and his loves—the inspirations for his films—while attending a retrospective of his work. Allen considers this to be one of his best films, along with The Purple Rose of Cairo and Match Point. The film is shot in black and white and is reminiscent of Federico Fellini's 8½, which it parodies. The film was nominated for a Writers Guild of America award for Best Comedy written directly for screen. Allen denies that this film ... more on Wikipedia

Stardust Memories is ranked on...

Stardust Memories is also found on...