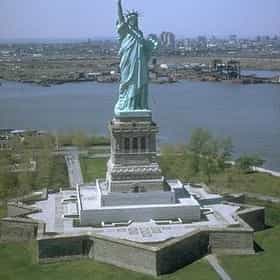 The Statue of Liberty is a colossal neoclassical sculpture on Liberty Island in New York Harbor in New York City, in the United States. The statue, designed by Frédéric Auguste Bartholdi, a French sculptor and dedicated on October 28, 1886, was a gift to the United States from the people of France. The statue is of a robed female figure representing Libertas, the Roman goddess, who bears a torch and a tabula ansata upon which is inscribed the date of the American Declaration of Independence, July 4, 1776. A broken chain lies at her feet. The statue is an icon of freedom and of the United States: a welcoming signal to immigrants arriving from abroad. Bartholdi was inspired ... more on Wikipedia

Statue of Liberty is ranked on...

#94 of 180 The Most Amazing Pieces of Artwork Ever Made 55.8k VOTES Click on any list item to see replica pricing and more information! This is a CrowdRanked List of the most fantastic pi...
#14 of 193 Historical Landmarks to See Before You Die 76.9k VOTES Historical places to visit before you die, ranked by history and travel buffs worldwide. Anyone can vote on this list of fam...
#3 of 18 18 Fascinating Photos of Historical Landmarks Under Construction 4.4k VOTES We see monuments, buildings, and historical landmarks as some of the most recognizable things in the world. Unlike naturally...
#3 of 217 People who voted for Statue of Liberty... also upvote Star Trek Franchise on The Greatest Sci-Fi Movies of All Time also upvote Indiana Jones Franchise on The Greatest Movies of the 1980s, Ranked The Best Tourist Attractions in America 41.4k VOTES The best tourist attractions in America are the most loved and most visited places to see in the United States. Visited by m...
#16 of 30 30+ Famous Places Seen From a New Perspective 19.3k VOTES You've seen these places and landmarks before, but not like this. These fascinating photos of 30 famous places from 30 new p...
#23 of 31 31 Amazing LEGO Versions of Famous Monuments 13.3k VOTES LEGO versions of famous monuments recreate some of the most beautiful buildings in the world along with some of the top natu...
#5 of 21 The Construction of the Most Iconic Landmarks on Earth 14k VOTES Rome wasn't built in a day, and neither were some of the most famous structures on Earth. From the Berlin Wall to the Golden...
#1 of 40 The Top Must-See Attractions in New York 1.3k VOTES List of the best things to do in NYC. These may include famous monuments, museums and parks. Stores and attractions also mak...

Statue of Liberty is also found on...