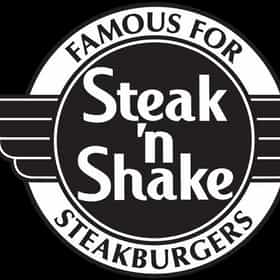 Steak 'n Shake Operations, Inc. is a casual restaurant chain located primarily in the Midwestern and Southern United States with locations also in the Northeast and Southwest United States, and Europe. The company is headquartered in Indianapolis, Indiana. There are more than 400 company-owned Steak 'n Shakes and more than 100 or so that are franchised. Typical restaurant locations have sit-down, drive-thru and front-window service, resulting in a hybrid of fast-food to-go service and diner-style sit-down service. Many Steak 'n Shake restaurants are open 24 /7. True to its name, the menu features primarily steakburgers and milkshakes, though other entrees, side items, and drinks are ... more on Wikipedia

Steak 'n Shake is ranked on...