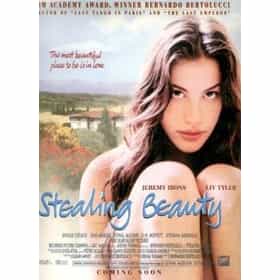 Stealing Beauty is a 1996 drama film directed by Bernardo Bertolucci and starring Liv Tyler, Joseph Fiennes, Jeremy Irons, Sinéad Cusack, and Rachel Weisz. Written by Bertolucci and Susan Minot, the film is about an American teenage girl who travels to a lush Tuscan villa near Siena to stay with family friends of her poet mother who recently committed suicide. The film was actress Liv Tyler's first leading film role. Stealing Beauty premiered in Italy in March 1996, and was officially selected for the 1996 Cannes Film Festival in France in May. It was released in the United States on June 14, 1996. ... more on Wikipedia

Stealing Beauty is ranked on...

Stealing Beauty is also found on...