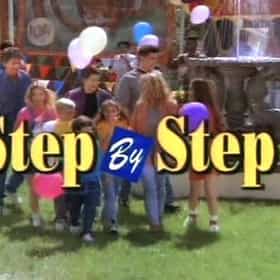 Step by Step is an American television sitcom that aired for seven seasons, originally running on ABC as part of its TGIF Friday night lineup from September 20, 1991, to August 15, 1997, and then moved to CBS where it aired from September 19, 1997 to June 26, 1998. The series starred Patrick Duffy and Suzanne Somers as two single parents, who spontaneously get married after meeting one another during a vacation, resulting in the two of them becoming the heads of a large blended family. ... more on Wikipedia

lists about Step by Step

9 Surprising Stories From Behind The Scenes of 'Step by Step' 647.3k views In a Los Angeles area lab in 1991, sitcom executives put The Brady Bunch and Full House into a petri dish, and Step by Step ...
The Cast Of 'Step By Step': Where Are They Now? 1.9M views Sure, The Brady Bunch probably holds the title of most popular show about a blended family, but Step by Step might have take...

Step by Step is ranked on...

Step by Step is also found on...