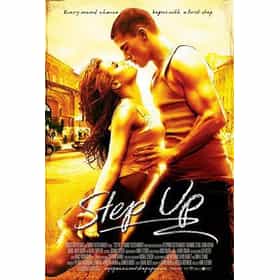 Step Up is a 2006 American romantic dance film directed by Anne Fletcher starring Channing Tatum and Jenna Dewan Tatum. Set in Baltimore, Maryland, the film follows the tale of the disadvantaged Tyler Gage and the privileged modern dancer Nora Clark, who find themselves paired up in a showcase that determines both of their futures. Realizing that they only have one chance, they finally work together. The film was followed by four sequels in the series: Step Up 2: The Streets, Step Up 3D, Step Up Revolution and Step Up: All In. ... more on Wikipedia

Step Up is also found on...