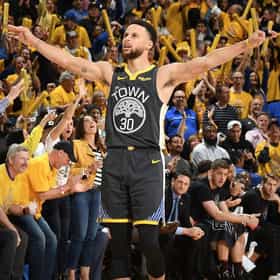 Wardell Stephen "Steph" Curry II ( STEF-ən; born March 14, 1988) is an American professional basketball player for the Golden State Warriors of the National Basketball Association (NBA). A six-time NBA All-Star, he has been named the NBA Most Valuable Player (MVP) twice and won three NBA championships with the Warriors. Many players and analysts have called him the greatest shooter in NBA history. He is credited with revolutionizing the game of basketball by inspiring teams to regularly employ the three-point shot as part of their winning strategy.In 2014–15, Curry won his first MVP award and led the Warriors to their first championship since 1975. The following season, he ... more on Wikipedia

Stephen Curry is ranked on...

Stephen Curry is also found on...