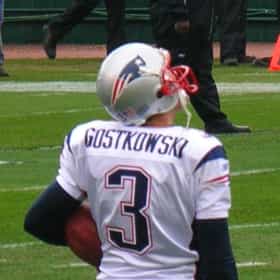 Stephen Haunt Carroll Gostkowski ( gost-KOW-skee; born January 28, 1984) is an American football placekicker for the New England Patriots of the National Football League (NFL). He was drafted by the Patriots in the fourth round of the 2006 NFL Draft. One of just two kickers drafted, Gostkowski was the only rookie kicker to make an NFL roster that year. He has won three Super Bowls with the Patriots. Gostkowski, who played both college football and baseball for the University of Memphis, is the most accurate kicker in Patriots history, and, as of the end of the 2018 season, the third-most accurate kicker in NFL history. He is also a consistent and prolific scorer: he is only the second ... more on Wikipedia

Stephen Gostkowski is ranked on...

Stephen Gostkowski is also found on...