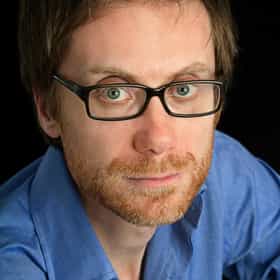 Stephen James Merchant (born 24 November 1974) is an English-American writer, director, radio presenter, comedian and actor. Merchant is best known for his collaborations with Ricky Gervais and Karl Pilkington, as the co-writer and co-director of the popular British sitcom The Office (2001–2003), co-writer and co-star of Extras (2005–2007) and co-host of The Ricky Gervais Show in its radio, podcast, audiobook and television formats; the radio version won a bronze Sony Award. He is also known for his voice role as Wheatley in the 2011 video game Portal 2. Merchant co-developed the Sky1 travel series An Idiot Abroad (2010–2011), appeared as himself in the BBC series Life's Too Short ... more on Wikipedia

Stephen Merchant is ranked on...

#45 of 185 People who voted for Stephen Merchant... also upvote Harry Potter Franchise on The Most Rewatchable Movies also upvote Star Wars Franchise on The Greatest Sci-Fi Movies of All Time The Funniest British and Irish Comedians of all Time 238.2k VOTES The funniest British and Irish comedians of all time is a geographically restricted subset of the funniest people of all tim...
#14 of 18 Hollywood Reacts To The 2020 Oscar Nominations 177 VOTES The 2020 Oscar nominations were announced and celebrities, nominees, and industry insiders took to social media to post thei...
#10 of 26 The Most Epic Celebrity Lip Sync Battles, Ranked 3.4k VOTES Fans love it when celebs act like normal people. But they like it even more when their favorite famous faces try to act like...
Famous Tall Men Over 6'2 444.6k VIEWS Some of the tallest men in Hollywood may not seem so on your screen. Paired alongside other tall actors, shorts actors weari...
Famous People Named Steve 10.6k VIEWS List of famous people named Steve, along with photos. How many celebrities named Steven can you think of? The famous Steves ...
Famous People Named Steve & Steven 55.5k VIEWS List of famous people named Steven, along with photos. How many celebrities named Steve can you think of? The famous Stevens...
#4 of 23 The Funniest Cringe Comedians of All Time 6.3k VOTES This list contains information about the best cringe comedians, loosely ranked by user votes. The best cringe comedians co...
Every Single Celebrity Who Has Guest Starred on Drunk History 7.5k VIEWS Comedy Central's Drunk History has it all, from the boozy narration of notable historic moments to rotating cast members who...
Hayley Atwell Loves and Hookups 8.2k VIEWS Who is Hayley Atwell dating? Many famous men have dated Agent Carter star Hayley Atwell, and this list will give you more de...
10 Actors Who Have Played Abraham Lincoln 11.1k VIEWS How to you bring a near-legendary historic figure to life? That's the challenge that these actors who played Abraham Lincoln...

Stephen Merchant is also found on...