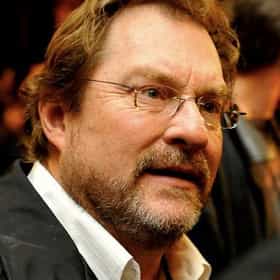 Stephen Root (born November 17, 1951) is an American actor, voice actor, and comedian. He has starred as Jimmy James on the TV sitcom NewsRadio, as Milton Waddams in the film Office Space (1999), and as the voices of Bill Dauterive and Buck Strickland in the animated series King of the Hill. His other roles have included Captain K'Vada in the Star Trek: The Next Generation two-part episode "Unification" (1991), Mr. Lund in O Brother, Where Art Thou? (2000), Gordon Pibb in DodgeBall (2004), Hawthorne Abendsen in seasons 2 and 3 of the series The Man in the High Castle, Jim Hudson in Get Out (2017), and supporting roles in a variety of HBO series, including Boardwalk Empire and ... more on Wikipedia

Why Stephen Root Is The Weirdest Actor In Hollywood 596 votes Many of us first became aware of Stephen Root's acting prowess in the 1999 classic Office Space, where his character Milton ...

Stephen Root is ranked on...

#15 of 15 People From TV and Film You Didn’t Realize Are Still Acting Regularly 2.3k VOTES Many actors exist at a mid-level fame equilibrium, having enjoyed their highest-profile successes years ago but still mainta...
#14 of 17 How 'Home Improvement' Would Be Cast If It Aired Today 4.8k VOTES We’ve seen it done for the likes of Full House, Charmed, and MacGuyver, but what if Home Improvement bec...
#12 of 75 The Best WTF With Marc Maron Podcast Episodes Of 2019 49 VOTES Since Marc Maron's first episode of WTF in 2009, his podcast has touched on a deep and broad range of topics that varies wit...
Famous People Named Steve 10.6k VIEWS List of famous people named Steve, along with photos. How many celebrities named Steven can you think of? The famous Steves ...
Famous People Named Steve & Steven 55.6k VIEWS List of famous people named Steven, along with photos. How many celebrities named Steve can you think of? The famous Stevens...
The 20 Actors In The Most Coen Brothers Movies 10.7k VIEWS Joel and Ethan Coen love to repeatedly use the same actors in their films. Six different actors have appeared in four or mor...

Stephen Root is also found on...