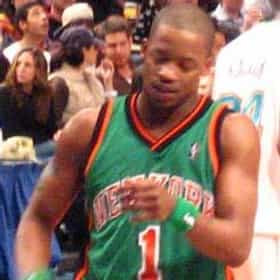 Steven D'Shawn Francis (born February 21, 1977) is an American former professional basketball player. He was selected with the second overall pick of the 1999 NBA draft, and was named the NBA Rookie of the Year in his first season. He was a three-time NBA All-Star while playing for the Houston Rockets. Francis also played for the Orlando Magic and New York Knicks, finishing his career with the Beijing Ducks of the Chinese Basketball Association. He was known for his crossover dribble, driving ability, and flashy dunks. He was given the nickname The Franchise. ... more on Wikipedia

Steve Francis is ranked on...

Steve Francis is also found on...